St George's Tower is one of the most recognisable landmarks in Croydon.  A broad-shouldered, unapologetic slab, it stands immediately alongside the twin dual-carriageways of the ring road (whimsically named Park Lane here) as they dive down to become the Croydon Underpass. The traffic is now perhaps regarded as an intolerable inconvenience; but I suspect that the novelty of the part-built orbital was a seriously attractive demonstration of modernity and forward-thinking when the tower was put up in 1964. 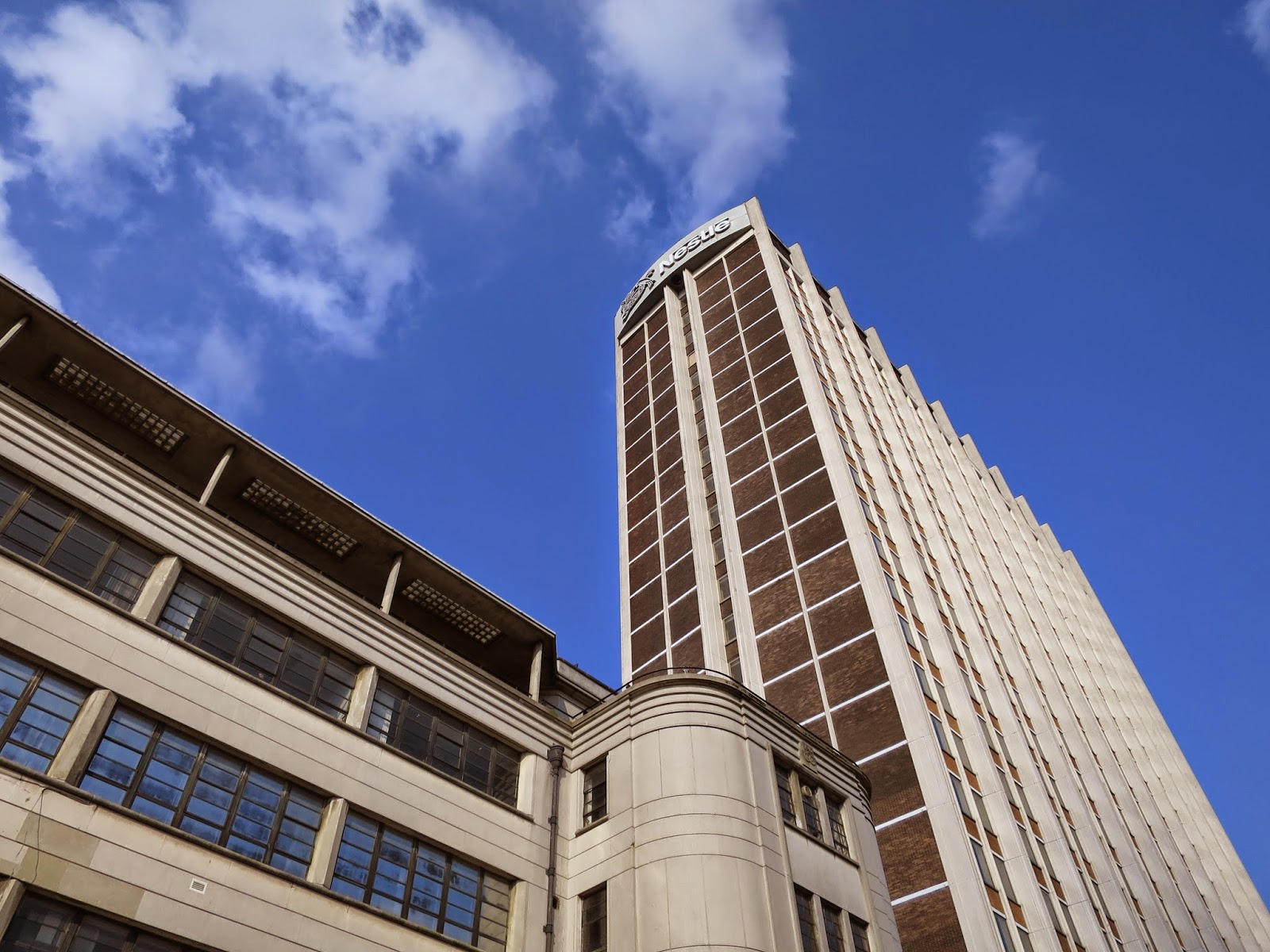 The building is more commonly known as the Nestlé Tower; perhaps for this reason the panelled ends always remind me of a two-finger Kit Kat.  Although, since Nestlé departed in 2012 and the tower stands empty, it's now perhaps more of a two-fingered valedictory to the town.

But my focus here is not on the tower; rather on the twin precincts of shops beneath which form St George's Walk. The covered half, beginning at the foot of the tower, is a sleekly Modern retelling of a Victorian covered arcade, with concrete tracery creating vaulted, geodesic domes of glass, and paired ribbons of clerestory windows like headlight trails in a long-exposure photograph. 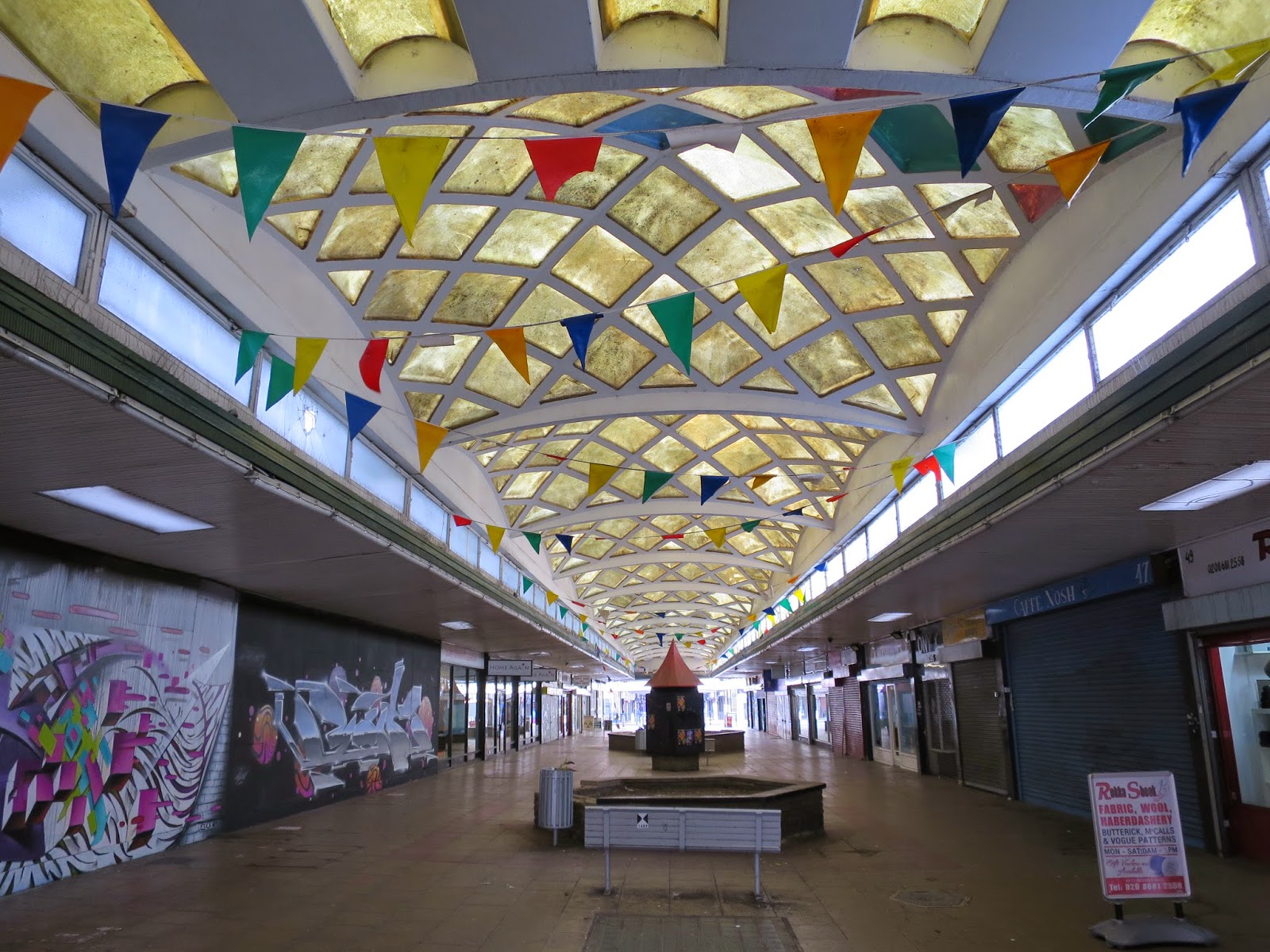 Sad that it now looks like this, isn't it?  And your first thought may be that my prose is delusional special pleading. So let's tackle head-on the fact that this space is in a dreadful state.  This grime and disrepair by no means makes the precincts irrevocably bad, but it clashes hard with our bipolar cultural bias towards the very old or the very new. This distaste for the recently-dated is part of a shared pretence that what is new and fashionable today will retain those qualities forever; we pretend that our newest, shiniest building could never age and become old-hat, or grubby, or sad.  Properly old buildings (by which really, we only mean Victorian) are safely exempt from this, perhaps in part because of the modish practice of knocking up mock-Victorian terraces as new builds with strangely small windows.  St George's Walk has long-since plunged into the downwards spiral of middle age: outmoded begat boredom, disrepair begat abandonment.

Despite all this, and the regrettable fact that you have to look pretty hard to see it, the designs of St George's Walk are really rather handsome.

The second half of the precinct is uncovered and more reminiscent of a 50s square from a New Town or Coventry, albeit without the agoraphobia-inducing void in the middle. A run of offices is suspended over the precinct on slim pillars in grey mosaic flecked with gold and silver tiles. The enjoyably kitsch bunting draws out the particoloured spandrel panels beneath the overlooking rows of windows. 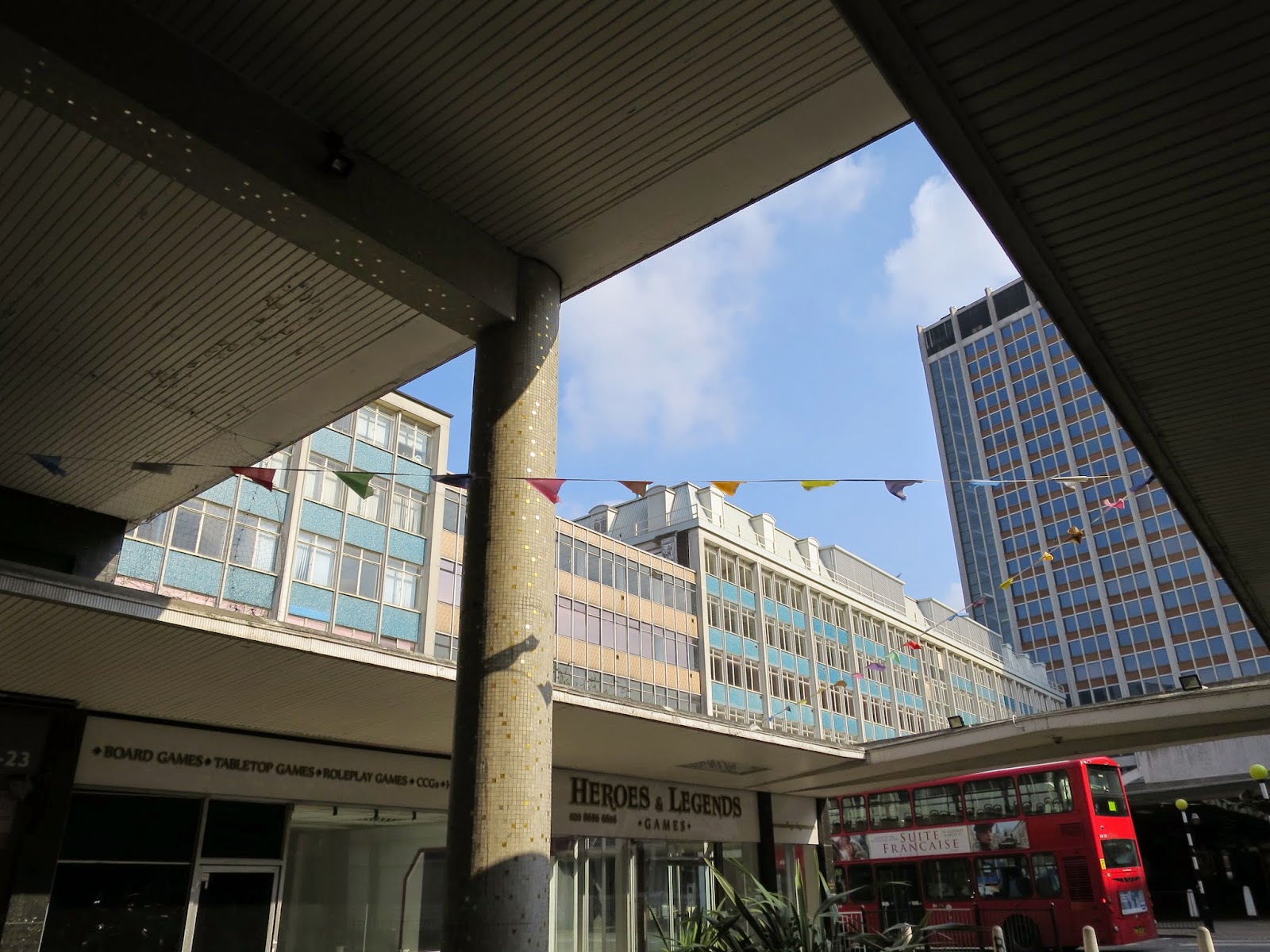 The arrangement of low sides and high buildings, along with the rain-porch projections on either side, describe conflicting vanishing points and create a cinematic sense of over-wide perspective, like Hitchcock's dolly zoom from Vertigo.  It's slightly intoxicating. 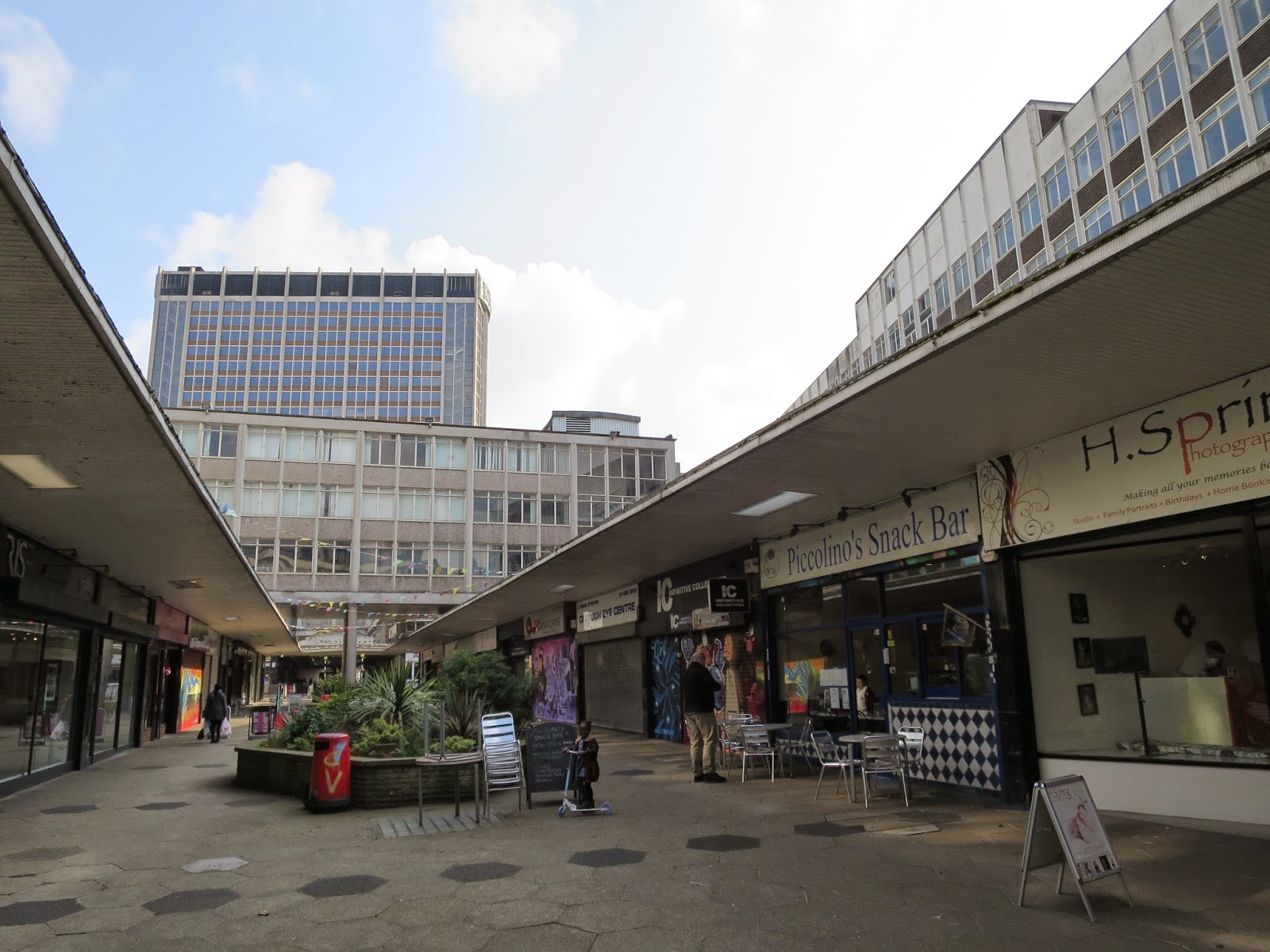 There have been schemes to redevelop the precincts, plausibly involving their eradication and replacement with luxury unique opportunity stunning development flats.  The most recent signs, however, hint towards a more respectful flavour of regeneration.  The recent arrival of the an art gallery suggests that maybe someone else believes the units could be used for more than snack bars and charity stores.  One can only imagine the transformative power of some fresh paint, a gallon of Windolene and a set of new lightbulbs.  And how many towns, I wonder, would kill for a purpose-built pair of shopping parades, minutes from the main drag, waiting patiently to be noticed?

I shall leave you to make up your own mind about the precincts and my special pleading.  Hopefully, one day I can update this blog with images that better reveal the sophistication and flair of the designs. 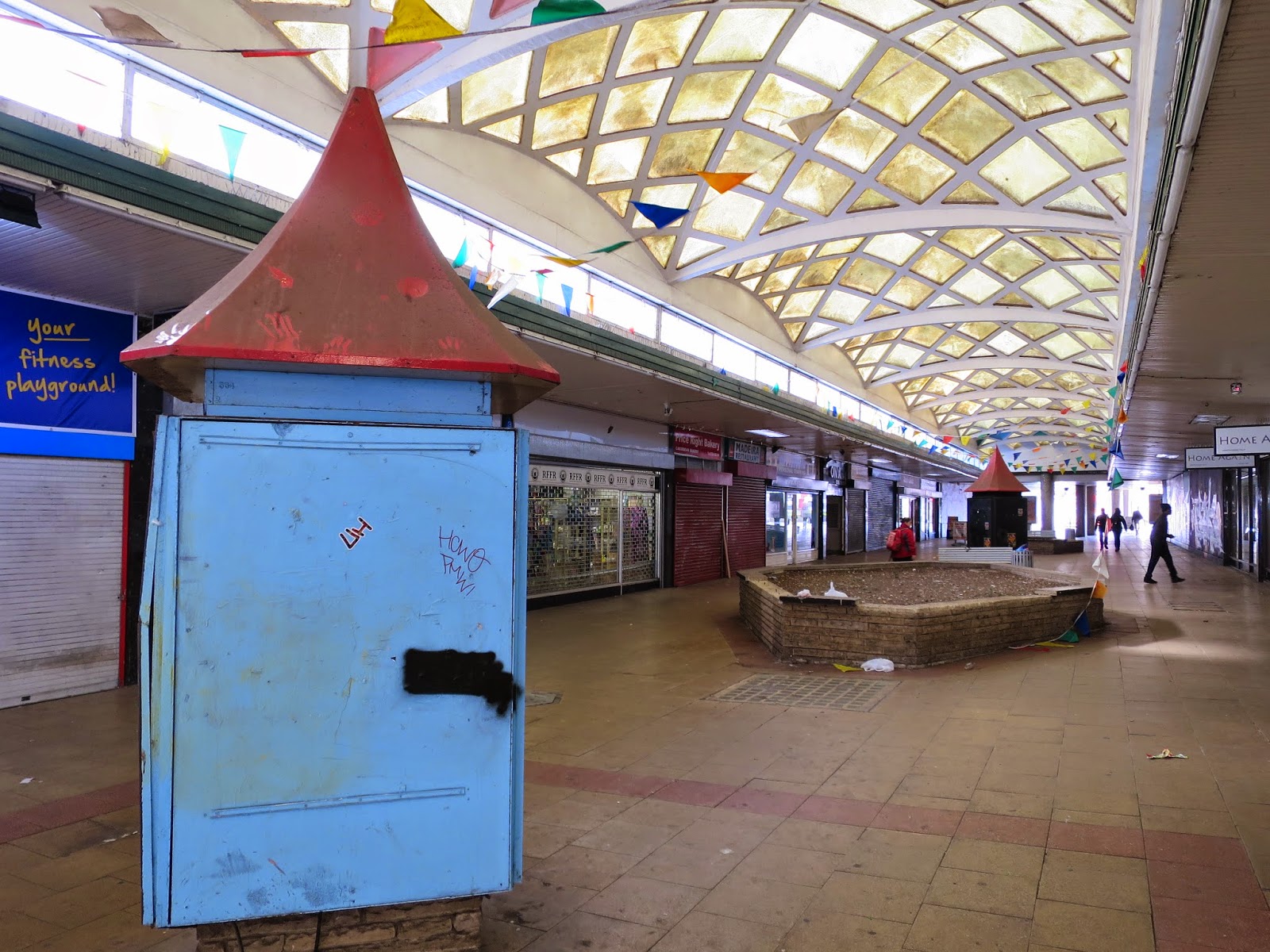